As a leadership development program, the Order of the Arrow places an emphasis on youth leadership. The OA defines a youth as any Scout under the age of 21. Tamegonit Lodge is governed by the Lodge Executive Committee, which is led by the Lodge Chief, 4 VIce Chiefs, the Lodge Secretary, and the Lodge Treasurer. Each Vice Chief leads a committee of chairmen who are all voting members of the LEC. The youth of the LEC are supported by the Adult Adviser corps, which is comprised of adults at or above the age of 21.

In the Order of the Arrow, there are three degrees of membership. We do not have ranks or elevations. All Arrowmen are equal, as we are brothers.

The first stage in the Order of the Arrow is Ordeal membership. This is the “joining stage”, and should be only temporary. After being elected or nominated by their fellow scouts, candidates participate in an Ordeal, intended to emphasize service and selflessness.During the induction, “candidates maintain complete silence, receive small amounts of food, work on camp improvement projects, and are required to sleep alone, apart from other campers, which teaches significant values.” If they succeed in their ordeal the candidates are then welcomed as Ordeal members in a formal Ordeal Ceremony.

Brotherhood membership does not provide a special degree of rank, status, or special honor (like that of the Vigil Honor). Instead, the Brotherhood is an opportunity for members to evaluate their past service to Scouting and to their lodge, and to reaffirm their belief in the high purposes of the Order. The ceremony is intended as a source of inspiration that motivates brothers to give even greater service to Scouting.  Any individual who has been an Ordeal member of the Order of the Arrow for at least 6 months and is a dues-paying member of the lodge, may seal his or her membership as a Brotherhood member.

Alertness to the needs of others is the mark of the Vigil Honor. It calls for an individual with an unusual awareness of the possibilities within each situation. The Vigil Honor is the highest honor that the Order of the Arrow can bestow upon its members for service to Lodge, Council, and Scouting. Membership cannot be won by a person’s conscious endeavours.

The Vigil Honor is a high mark of distinction and recognition reserved for those Arrowmen who, by reason of exceptional service, personal effort, and unselfish interest, have made distinguished contributions beyond the immediate responsibilities of their position of office to one or more of the following: Lodge, Order of the Arrow, Scouting community, Scout Camp. Under NO circumstances should tenure in Scouting or the Order of the Arrow be considered as reason enough for a Vigil Honor recommendation.

How to Get Involved in Tamegonit Lodge

The purpose of the Service Corps is to crystallize the Scout habit of helpfulness into a life purpose of leadership in cheerful service to others, with emphasis towards service opportunities at the Heart of America Council Scout Reservations.

See above for more information about the LEC. If you are interested in joining, please contact [email protected]

Other than continuing a tradition of high-quality ceremonies, we would like to see our team grow in both size and cohesion. We’re looking forward to the continuation of our meetings and furthering each of our ceremonialists’ understanding and connection to the scripts, especially in regards to the fundamental values the scripts lend to our organization. Recruitment has been a focal point this past year as some of our team members have been getting older and can’t perform forever. It would be amazing to have fresh faces that are interested and invested in learning more about the Order of the Arrow and the symbolism of our ceremonies. Hopefully, this year will be a big building block in the progression and continuation of our consistently strong group from last year, and in the years to come.

Learn more by emailing our C-Team Chair at [email protected] 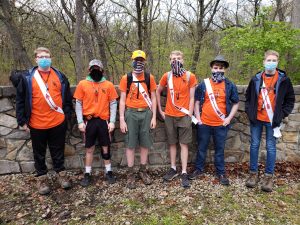 The Order of the Arrow is not a one man show. It takes many moving parts and different people to run a successful Lodge. This is the most evident during an Induction. It takes over 50 staff to
run a successful Induction. This is why we need people like you to help us. Whether you want to be an Elangomat and lead the ordeal candidates in their cheerful service, or if you want to perform in ceremonies and inspire the next generation of scouts, we need your help. If you are interested fill out the staff interest form and if you have any questions about any of the staff positions, please email [email protected].

The Administration Team is responsible for managing the registration, check-in, and attendance at all Lodge events. This Committee is also responsible for all Lodge databases and tracking THRIVE goals. This Committee includes the Membership, event Registration, Training, and brotherhood Conversion chairman, all lead by the Vice Chief of Administration.

The Program Committee is tasked with planning and executing all non-Induction events such as Fall Fellowship, Winter Banquet, NOAC, and Section Conclave. This Committee also involves the OA High Adventure Program, Chapel, and Parking Chairman, all lead by the Vice Chief of Program.